Not too long ago, I participated in the I’m a Dubuquer campaign–some of Y’all may have heard of it. If you haven’t, go check out www.imadubuquer.com! This project was a joint effort by the Telegraph Herald and Inclusive Dubuque to share what our city looks like; I have been pretty impressed with this initiative so far. Today I saw a letter to the editor which made the claim that a Dubuquer is someone who is born in Dubuque, Iowa, or adopted by the city. Now, I wasn’t born here, but we moved here when I was seven, and I don’t have a connection to Cedar Rapids or Delhi. So I’m just going to say that I count–and since I don’t think a city has the ability to adopt people, I’m going to designate myself as an ambassador of this city and let it be known that I will adopt anyone who wants to claim the title.

A few things about me: I don’t drink beer because I’m a recovering addict and that is a bad combination. I do play Euchre when I have free time (it’s not common). Overall, I love living here–even if there are times when I get frustrated with this place. I’m pretty sure I won’t qualify as a “real” Dubuquer in the eyes of the man who penned the letter, but I want to elaborate on a few of my qualifications to speak on the matter of what does and does not make a Dubuquer.

First, like I said, I’ve lived here since I was seven–my family moved here in 1992, and with the exception of about a year total living in a few other places, this has been my home. I remember the smell of the Pack, the perfume of sawdust from Jeld-Wen and the aroma of bread as it baked at Sunbeam. The Pack and Jeld-Wen are no longer, and Sunbeam is now Bimbo. I guess I always have the smell of fish flies to depend on when the hatching takes place.

I’ve lived and worked alongside other Dubuquers, like my coworker George from Area Residential Care who used to go out for cigarette breaks with me and tell stories from when he worked at the Pack. Or my friend Shelly, who HAD worked at the Pack and pursued a career in nursing when the company closed down. (I’ll have to find out if people who grew up in Centralia consider themselves Dubuquers or not. There is a lot of overlap. It’s okay–I’ll adopt them in.) My childhood was spent at Grandview United Methodist Church, sitting in the balconies and listening to organ music and the choir–this was back when the church was still on Grandview Avenue; it moved out to the West End the same year I graduated from Senior (2003). I was a proud member of our local Teamsters and joined the SEIU when they went on strike in the early 2000’s. (Solidarity forever: the automatic response to a picket line is to come back with bottled water, coffee, and donuts.)

We moved here the same year that Dubuque made national headlines for cross burnings. Racial tensions were high (and continue to be, really), and the city found itself at a sort of a crossroads. The Dubuque I grew up in was one that was continuing to recover from the recession of the 1980’s which had spawned the slogan, “Will the last one leaving Dubuque please turn out the lights?” (In January of 1982, Dubuque led the nation in unemployment at 23 percent.)

Finally, my employment for nearly a decade now has been with Hillcrest Family Services, an agency which employs over five hundred people in our city and has served the needs of our community since 1896. I eat turkey and dressing sandwiches from Cremer’s and sweet corn from Fincel’s, and low-key am in a relationship with the Mississippi River. 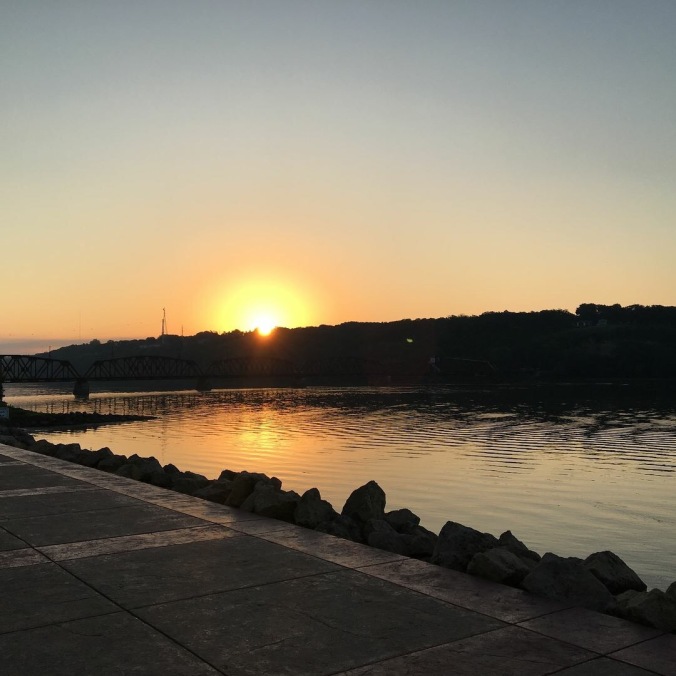 I’ve seen this city go through a lot of changes over the years, and part of these changes have involved rethinking what, exactly, is a Dubuquer.

If we’re going from the definition of beer-drinking, Euchre playing people who were born here/adopted by the city–seriously, what does that mean, even? Well, I guess the REAL Dubuquers are, in fact, a dying breed.

But the last part of Rick’s definition of a real Dubuquer is the part where I can find commonality. A character who loves living in Dubuque, a way of life. And I see that in so many of the people who I know that took place in the I’m a Dubuquer campaign–and in other members of our community. Passionate, hard-working, caring people who want our city to be a place of happiness and opportunity for all of our community.

Maybe life isn’t as simple as it used to be; things aren’t so cut and dried. Change is hard and involves loss and with that loss can come a flood of nostalgia and grief. We cling to our ideas and our history and sometimes the stories that we tell ourselves keep us clinging to things that no longer work for our good or for the good of others.

And by God, our stories have to work for the good or we stagnate and die out.

View all posts by Indigo Channing →
Our opinion: Widen definition of ‘Dubuquer’
Accenture Debuts a New Video Designed to Make Us All Better Allies