Jessie Big Knife is currently finishing up his undergraduate degree at Upper Iowa University and is in the process of applying to law schools. He shared this personal statement, part of his application packet, with his former professor Eric Eller, finance professor at Loras College, an Inclusive Dubuque Network Partner. 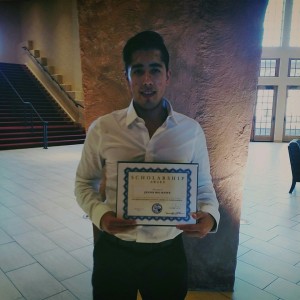 I grew up on the Chippewa-Cree Indian Reservation in Rocky Boy, Montana. I never knew my father, and my mother was a twenty-two-year-old high school dropout who was simply not ready to be a parent. My grandmother raised me along with my two younger cousins. Living on the reservation was difficult, and young people there are not generally expected to graduate high school or make a good life for themselves, but it was my experiences there that made me realize the value of education.

Growing up, I was surrounded by poverty, and I was constantly worried about my future. I remember once sitting in a local soup kitchen when I noticed a man across from me. He wore a dirty, threadbare coat, he smelled, and he downed a huge plate of canned spaghetti within seconds. Even at six years old I wondered, would I be like this man? He was familiar, not just because I’d seen him around the reservation, but because of the beaded medallion around his neck which looked just like my beaded belt buckle, and because when he spoke it was with the same Cree dialect in my voice.

I’ll never forget the reflection I saw of myself in this man. Men like him were all too common on the reservation. The only people in my community who had good jobs—the teachers in the schools, the doctors—looked and sounded nothing like me. They were white, and, in any case lived outside the boundaries of the Chippewa-Cree community. I had no one to look to as a model for how to escape. I watched my classmates struggle to finish high school, with only sixteen out of thirty-four making it to graduation. Living in Rocky Boy, I knew the only way to succeed in life, to not be that young man at the soup kitchen, was to get out. I worked hard both in and out of the classroom, seeking an opportunity to leave, and was thrilled to be accepted at Upper Iowa University on the men’s basketball team. After working a whole summer to save up the five hundred dollars I needed for a one-way ticket to Iowa, I was finally out of Rocky Boy.

College felt like living in a dream. Everyone seemed so normal. It was an illusion, of course, but to me it seemed as if everyone there had what I’d always wanted—nice clothes, parents who cared for them, and a smooth, easy confidence in their future prospects. I loved basketball, and I loved college, but something unexpected happened in my time away from the reservation. As much as I’d wanted nothing more than to leave dead-end Rocky Boy, I found myself missing my family, my culture, and the sense of place I had there. I wondered if these were my choices: stay with my community in Rocky Boy and end up back at the soup kitchen, or find a viable future away from it, but always feel like an outsider.

As I reevaluated my life and goals, I came to realize that those weren’t my only two choices. I understand now that there are other young Chippewa-Cree kids back in Rocky Boy who right now feel the same way I did. My dream is no longer to get as far away from Rocky Boy as possible. Instead, I want to continue my education in law school and develop the skills I need to pursue a career that will one day be meaningful to those still on the reservation. Heading into my final year at Upper Iowa University, I’ve come to realize that life is about becoming someone who does not simply escape a problem, but is part of the solution. I have been away from home for four years now, and I look forward to continuing my education so that I can someday go back, and let the kids still in Rocky Boy know that wearing beads and speaking Cree does not have to be an identity to run from, but one to embrace.