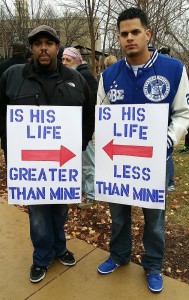 Caitlin Daniels is an AmeriCorps, Grade-Level Reading Coordinator at the Community Foundation of Greater Dubuque and Vice President of the Black Student Union at University of Dubuque

The NAACP declared December 13, 2014 as a national “Day of Remembrance.” On this day, the Dubuque community joined the rest of the nation in solidarity and action to speak out against systematic injustices towards unarmed young black men all over our country and nothing being done in response.

More than 150 people gathered at Jackson Park to begin the nine-block walk to Washington Square while chanting “Hands up, don’t shoot.” As the crowd walked the sidewalks, observers joined them, and upon arriving at Washington Park, the chant changed to “Black Lives Matter.”

NAACP member Ernestine Moss challenged everyone to make a difference by joining a committee and making their voices heard. “We are here to work together to make a change in our justice system because change has to take place,” said Moss during the event. She stated that unity is the first step to making a difference.

Many people have criticized the phrase “Black Lives Matter” and as Police Chief Dalsing stated during the event, “That is not meant in any way to devalue any other lives. All lives matter. What this sign tells us is that yes, black lives matter, we’ve made change, but we still have work to do.”

As the speeches concluded, participants were encouraged to attend future NAACP meetings, city council meetings, and other community meetings in an effort to get involved and make their voices heard.

Inclusive Dubuque is a local network of leaders from faith, labor, education, business, nonprofit and government dedicated to advancing justice and social equity in our community.
View all posts by Inclusive Dubuque →
Christmas Party Builds Ties with Neighbors
Is Dubuque an Equitable Community?

Featured here are news articles about the Inclusive Dubuque Network and its work in the community.